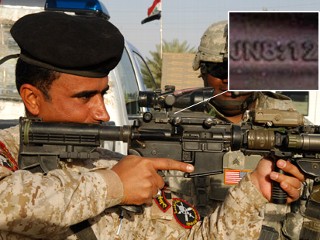 Note the reference to John 8:12 in the serial number of the gun’s scope.

The ACOG–Advanced Combat Optical Gunsight–is a small telescope with aiming cross-hairs. Unlike the sort used by hunting rifles and sniper rifles, the ACOG is designed for closer ranged firefights and to be mounted onto assault rifles for that purpose. They are made an American Company, Trijicjon, with an unabashaedly Fundamentalist Christian corporate culture. Reconciling their avocation of the Lord Jesus and their desire to help guys with guns shoot what they are aiming at got them into trouble a few years ago.

The company’s vision is described on its Web site: “Guided by our values, we endeavor to have our products used wherever precision aiming solutions are required to protect individual freedom.”

“We believe that America is great when its people are good,” says the Web site. “This goodness has been based on Biblical standards throughout our history, and we will strive to follow those morals.” (Source)

When news of the “Jesus Rifles” broke in 2010 the company explained that the tradition of putting references to scripture on its products had begun nearly 30 years previous with the company’s founder, Glyn Bindon (who died in a plane crash in 2003). Many people around the world (the ACOG is used by many militaries) objected to the practice for many reasons. For one, it suggested a divine sanction to war, or more specifically, a Christian blessing for the “war on terror.” The Taliban (or now ISIS) could point to the “Jesus Rifles” as proof that American and her allies were perpetuating a religious crusade against Islam. The company decided to remove the references on scopes sold to the military, but continues to include the inscriptions on sights sold for civilian use. 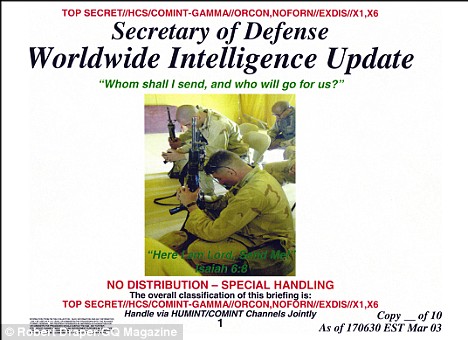 The cover page for a Pentagon report for the President including a quote from Isaiah 6.8.

This is not the first time something like this has happened in the “war on terror.” Back in 2003 daily Intelligence briefings prepared for President Bush included quotes from the Psalms, Ephesians, and other bits of the bible. According the CG magazine, the practice began during the Iraq war and was meant to comfort the President in the face of American combat deaths. On April 10, 2003, a report cover featured a picture of a toppled statue of Saddam Hussein and a quote from the Book of Psalms: “Behold, the eye of the Lord is on those who fear Him. … To deliver their soul from death.” President Bush liked the quotes and the practice continued.

“Therefore put on the full armor of God, so that when the day of evil comes, you may be able to stand your ground, and after you have done everything, to stand,” read the cover quote two weeks earlier, on March 31, above a picture of a U.S. tank driving through the desert, according to the magazine, which obtained copies of the documents. (Associated Press)

At best the “Jesus Rifle” controversy and the Bush administration invocation of the bible in reports were examples of the apotropaic use of scripture. That is, using the Word as a talisman to ward off evil. Scripture, crosses, and other religious symbols have been used by people in danger of conflict ever since the two things existed (symbols and conflict). This would be a misdemeanor form of idolotry, a violation of the first Commandment (depending on who’s counting). But it gets worse.

You see I think this is an example of  a violation of the second Commandment as well: “Thou shalt not take the name of the Lord thy God in vain.” Invoking God’s name, implying that we are the “children on light” receiving special blessing and protection, is simple blaspheme. God loves everyone, bad people included, and intends that we should all live in peace and human flourishing. Personalizing the words of faith may be comforting, but it is bad theology with dangerous implications.

All this comes to mind in light of how this Sundays gospel text has traditionally been interpreted. “Render unto Caesar” (Matthew 22.15-22) is one of those great moments when Jesus is one step ahead of the crowd who would parse his words for evil purposes. Yet I would suggest he remains one step ahead of the crowd who would parse is words for evil purposes in our own time. You see, Jesus is not telling people that can draw a neat line between their obligations to the powers of this world and to God. As though on Tuesday and Wednesday you can serve one and Saturday and Sunday serve the other. Nor is this a proof text for those who wish to support capital punishment or war as “rendering unto Caesar.”

In fact, it’s not initially clear what Jesus means at all. He has been confronted, in the scene, with a clever trap. If he supports paying the tax then he supports the empire, is complicit with the compromised Temple establishment, and burdens the poor. If he rejects the tax he is a rebel and an insurrectionist. The temporary alliance of Herodians and Pharisees is dangling Jesus over the great chasm of 1st century Palestinian politics. Jesus is able to escape this predicament by challenging the terms of the trap itself.

First, he asks to see the coin used for the tax (naturally Jesus has nothing but the pockets of functionaries of Empire jangle when they walk). Then he points out the idolatrous imprint on the coin: the would be God King of the world. Then he makes the astounding claim that the money belongs to the Emperor and that he should have it back again. After all, what God-fearer would hold onto such a token of blasphemy and imperial violence?

The currencies of this-world-power–cash, lives, “success”–are counterfeit it God’s economy

Here is where it gets tricky. Jesus still advocates paying the tax, at the end of the day, but is providing a framework for thinking about this action that it is not paying at all. Rendering the tax is now, ironically, a gesture of rejection rather than acquiescence. “Here is your dirty blood money,” Jesus says, “and you are welcome to it.” The currency of the realm (cash, lives taken by violence, whatever) is counterfeit in The Kingdom’s economy. We should hand them over with as much disregard as we would monopoly money given to children.

Paying taxes, going to war, or fulfilling other demands of the state are not holy acts with divine sanction and blessing. They are opportunities for Christians to to exercise kenotic humility and spiritual detachment. “No one can serve two masters; for a slave will either hate one and love the other, or be devoted to one and despise the other. You cannot serve God and wealth” (Matthew 6.24). There is no magic line dividing God’s things from Caesar’s things; they are all God’s things and we are called to abandon them as we pick up the cross and follow Him.

Priest, blogger, diplomat: Tay Moss helps people navigate God's crazy universe with humor, good food, and an occasional idea. He is leading his congregation (Messiah, Toronto) through major transition as they launch a fresh expression of church. His professional interests include missional church, new media, and the mysterious arts of the priesthood such as manual acts and cassock-wearing. In spirituality: a monastic. In management: a skipper. At home: a cook. A man with too many hobbies, Tay also finds himself sailing, cooking, watching TV, producing videos, brewing, and building canoes. He can be followed on twitter (@taymoss), pinterest (wtaymoss), youtube (taymossninjapriest), and facebook (tay.moss).
View all posts by Tay Moss →
This entry was posted in The Preachers' Table and tagged capital punishment, feature, just war, pacificism. Bookmark the permalink.