Welcoming the Stranger | The Community

It seems to me that in Christendom we became so accustomed to having “strangers” look more or less like ourselves that we’ve forgotten how to welcome a real stranger in our midst. Let me back up a minute. The baby boomers- my parents- left the church in droves, tired of the hypocrisy they found there and looking for something a little more rational to wrap their scientific minds around. Their children and grandchildren, however, have found out they’re still spiritual beings after all and find themselves wandering in search of home. You’ve heard the story of the postmoderns (for more on millenials and postmodern culture, check out Andrew Stephens-Rennie on The Community’s page: https://thecommunity.anglican.ca/generation/). 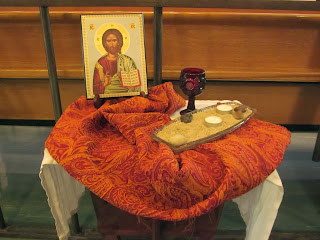 These young spiritual nomads, however, are wandering into our churches and they wander into my chapel at the college. Just this week, a young man showed up asking what time mass started, clearly unaware that there was a difference between my midday prayer service and mass, which is offered next door at the Jesuit college. When I asked him to read the Gospel, he replied, “Oh no. I’ve never been to church before.” Seriously? I thought to myself, He must be exaggerating. Obviously he wouldn’t be here if he’d never been to church before.

As it turned out, however, my new friend wasn’t exaggerating at all. That little prayer service was his first experience of Christian community in his entire 20 years of life. Now, for those of us who’ve been doing this since we were in utero, our reactions to such a visitor tend to be pretty predictable: first, disbelief. Second, make him look like us.

Have you ever met a child who doesn’t understand that someone else could possibly not speak his language? He just chatters away at you in Spanish, confused when you don’t respond. I’m afraid that’s what we’re often guilty of in church land: presuming that a visitor wants to be like us SO BADLY that she’ll jump right in, immersing herself in a foreign culture without any kind of translation or transition.

Unfortunately, however, it’s pretty uncommon for a stranger to see why they should learn our language. It’s just too foreign and too hard. It may not be that he’s obstinately unwilling- remember that postmoderns don’t tend to have the personal hangups with the church that their parents had- but it just doesn’t make sense. Take, for example, the code we so often use to guide parishioners through a service. “CP126”, the bulletin says. How would an exchange student from China ever know what that means? Occasionally I have a hard time following an order of service, and I’m a leader in the Church!

A friend of mine with extensive experience in youth ministry is fond of saying, “When God chooses to bless you, how will you make room for the blessing?” I’m afraid that sometimes we’re guilty of wanting to be blessed but being unwilling to make room for the stranger. A big part of my job at the college- and, I would submit, the call of all Christians- is to continually ask the question, “What would this look like for an outsider? How can our space be more welcoming to the stranger Jesus welcomes?”

Allison Chubb is a chaplain at St. John’s College at the University of Manitoba and a youth coordinator for new Canadians in downtown Winnipeg. She is particularly interested in how youth engage what Robert Webber called “ancient-future worship,” those rituals of old practiced in a postmodern context where a new generation finds itself searching for rootedness. She describes herself as “paid to hang out with God and hang out with people.” On the side she loves to create by cooking, gardening, crafting, and balloon-sculpting.
View all posts by Allison Chubb →
This entry was posted in When Jesus Goes to College and tagged baby boomers, Christendom, feature, millenials, nomads, outsider, stranger, welcome. Bookmark the permalink.

4 Responses to "Welcoming the Stranger"